Good posture: Is it important?

I've been thinking a lot about this recently.

My regular readers will know that I consider good posture an essential part of my condition management.

However, recently I've seen blogs, tweets and articles from physiotherapists about how posture isn't important. The first tweets I saw on this topic were sweeping statements that the idea of 'good posture' was nonsense. This view was one I couldn't understand. But there must be a reason that professionals hold this view so I read up a bit on it.

I read various links and blogs - many more balanced than the initial tweets I'd seen, but still talking about how posture was not such a key issue - saying we shouldn't be focusing on a specific position, and perhaps the important thing was movement. (like this blog that someone tweeted - I'd recommend having a read - but bearing in mind the points I raise below.).

Some of them, like this one, made partial sense.... But the trouble is that I can cause all sorts of symptoms by sitting or standing or lying in poor posture - from numb limbs to pain....are they saying that I shouldn't be avoiding these positions?

I was starting to suspect that there might be a difference of meanings between my 'good posture' and the 'good posture' of the physiotherapists I follow on twitter.

Then I saw a tweet mocking the picture below - ridiculing the concept that leaning on one leg could cause problems:
And I think I finally might be starting to understand the issue.

What I consider 'poor posture':

I looked at this image and thought.....that's hardly leaning at all! I can stand like that without causing joint problems. Is that what the physio world means when they talk about poor posture not being an issue?

I took a photo of myself standing in this OK position (left hand image). And a photo of me in what I call 'poor posture' - what 'leaning on one leg' means to me (right hand image): 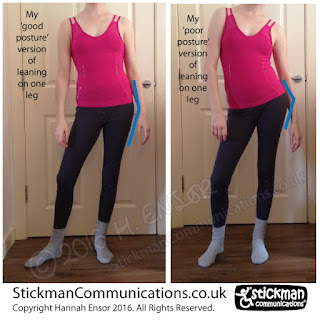 I've not previously seen myself in the posture shown in the right hand picture. Now I see it, it's obviously quite extreme, but my pre-diagnosis self wasn't aware that my 'lean' was any different to that of my colleagues and friends (which looked more like the first image) - and I've only just realised how different it is. It's simply my relaxed version of leaning on one leg. This is the position I will sink into if I start by being in my 'good posture' leaning stand, but then get distracted - like by a message on my phone.

It hurts. Not to start with, but the pain grows in the background, and then when I try to move out of this position, the pain hits me. I have to take my weight off my leg and kinda wiggle it before moving otherwise it feels very unstable and the pain can hit excruciating/tearing (I've never tried pushing through to see if anything actually tears). It can also give me various nerve-type pains and pins and needles. Even if I only hold this position for 30 seconds I'm left with what feels like a minor joint strain. 10 hours after taking this photo, my hip is still whinging at me. The longer I hold the position, the worse the after-effects.

This 'flop' is right at the end of my range of movement, relying on ligaments and involves very little muscle use.

This, to me, is poor posture.

What I consider 'good posture':

I dance in good posture. Always. (Except when a joint slips and I have to wiggle it back, but that doesn't count). But I don't always dance in the same position. I dance in 'alive' positions - moments of active and moments of passive, but always ready to move. Total flop never happens in dance because there is always that conscious awareness of movement or being ready to move. I simply can't afford to let joints flop beyond the range I can control - and into poor posture. Good posture is within my range of movement, where I can control it. If I am in good posture I can go from resting to moving without joint problems. If I've flopped, I can't. And over time, my 'good posture' range has grown as my strength and control have improved.

My 'good posture' can be quite extreme too - but it's controlled extreme, and not held for longer than I can control. It might leave me with the ache of well-used muscles, but it has never left me with the 'ligament strain' feeling. 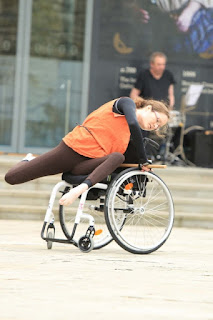 'Good posture' hasn't always included this range of movement - to start with it was a much smaller range. In the early post-diagnosis years I wouldn't have been able to do the 'good posture lean on one leg' in the earlier photo - I would have gone straight to flop level 'poor posture'. By working to stay within the range I could control, and avoiding flopping out of it, I have expanded my 'good posture' range.

Recently I had to leave a dance class after about 10 minutes. I would explain it as "I couldn't maintain good posture". What I mean is: I couldn't keep joints under control. I'd be in a position that is normally OK, then my joints would slip. Not drastically 'out', but enough to require a wiggle before moving or using another limb to move the joint back into a controllable range. It was like there wasn't a middle ground. Either I was actively controlling my limbs - or joints would slip, causing pain, pinging nerves and pulling ligaments.

So I went home. And spent the evening making sure I maintained 'good posture'. My muscles, for whatever reason (probably the extreme fatigue I was experiencing that day plus the extra flexibility that my hormones cause) struggled to control joints, so I had to flop. I couldn't physically maintain the muscle control/tone that my joints seem to thrive with. But being aware how important good posture is for me, instead of crumpling on the sofa then wondering why I'm in so much pain with multiple joints feeling stretched and unstable, I created a supportive 'nest' where I could relax without anything 'hanging off the ligaments' - a pillow between the knees, a cushion at my waist, a pillow keeping my right arm from flopping forward and pulling my shoulder out etc. No position that triggered the sharp, stretching, pulling ligament pain or the pinch of joints starting to move out of 'good' positions. (Note: This 'nest' isn't something I use for long periods - otherwise I would weaken muscles and cause more problems by doing so. But I have found it a useful way of allowing my body to rest when I've massively overdone it, or am ill.)

Is my need for 'good posture' just because of a connective tissue disorder?

In the article linked earlier in this blog it states "Evidence based practice is a game of probabilities and the probabilities are well stacked against posture being a cause of many musculoskeletal problems." - This gives room for issues where posture is a cause. But it also made me think...well, could you argue that although my posture triggers the symptoms, the underlying cause may actually be my hypermobile-ness and connective tissue disorder?

Perhaps all I've written about is just because of my conditions and that for the non-hypermobile population there isn't such a thing as poor posture. I don't know.

I suspect my definition of 'good posture' covers what the physios were referring to as movement that is so important.

Either way, when someone says 'posture isn't important' or 'leaning on one leg will not cause problems' it is only my years of post diagnosis physiotherapy, management advice, and dance, coupled with reading up on exactly what physio's mean by 'good posture' that has enabled me to feel I understand it.

But what about pre-diagnosis, when I 'knew' I was average and healthy? What if I'd read or been told that posture wasn't important by professionals ....how would it have affected me?

I strongly suspect that, if worded along the lines of 'good posture isn't an issue' or 'there's no such thing as poor posture', I would have deteriorated faster and further. Not because there is a set position that is vital to human health, but because my definition of 'good posture' kept me from the extreme positions I can flop into. Which would have caused more pain - and likely more ligament damage. The 'good posture' concept helped me manage and minimise some of the effects of my hypermobility without me even being aware of my hypermobility.

'Leaning on one leg' can mean different things to different people - and for some it does cause problems.

I agree that the solution for many (probably most - possibly all) pain-causing conditions is not to aim for a set, rigid, 'perfect' body position.

I agree that learning to move with confidence and strength, and to avoid prolonged static postures is likely to be of much more help than aiming for a specific posture.

But at the same time I would ask any professional reading this to remember that a patient's definitions of 'good/poor posture' might be different to yours. If a certain posture (or total flop position) which the patient calls 'poor posture' is causing them pain or other symptoms, then be aware that if you dismiss the whole good posture/poor posture issue - you may also be taking away a key to their ability to self manage and improve their symptoms.
Posted by Hannah Ensor at 21:20

World Arthritis Day 2016 - The future in your hands

And so, as part of the #WAD2016 campaign "The future in your hands", here is a small part of my story of living with a rheumatic or musculoskeletal disorders.

As a child I was different to my peers - often injured, more easily tired, constant pain and many other issues, but those quirks didn't become permanently disabling until I reached my early 20's.

By 24 I had become a wheelchair user due to severe joint problems and pain caused by a hypermobility syndrome (probably Ehlers-Danlos syndrome) where my joints are too loose, and the ligaments are easily stretched and damaged, although I wasn't diagnosed for another year or so. I steadily deteriorated. By 29, long term sick leave from my Environmental Health career had become formal medical retirement. It was an incredibly tough time - I felt that I had lost a part of who I was. 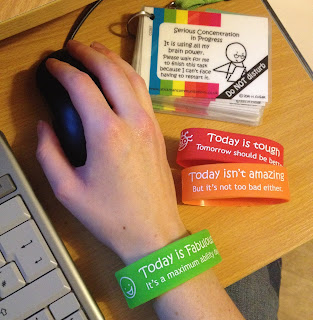 However, during one of my hospital stays I discovered a talent for drawing stickmen. And it seemed that people understood these stickman descriptions of how I felt much better than my attempts to explain using words. The solutions to my own problems around 'how do I make them understand' became products that proved to be the solutions other people needed too.

So while volunteering for the Hypermobility Syndromes Association - which provided the support I needed in learning to pace, and to respect but not fear my conditions and to get stronger and more acitve (contemporary dance is totally awesome and works fabulously around my physically limitations!) I also found myself setting up Stickman Communicaitons - using my stickmen to help create understanding for others too.

My RMD took a career I loved, but it also gave me a new career - which I love even more.

So yes, I really do feel that my future is in my hands. Both metaphorically and physically!

Hannah Ensor
Oxfordshire, United Kingdom
My view on life: through comedy goggles, on wheels, with an uncooperative body all depicted in stickmen cartoons.